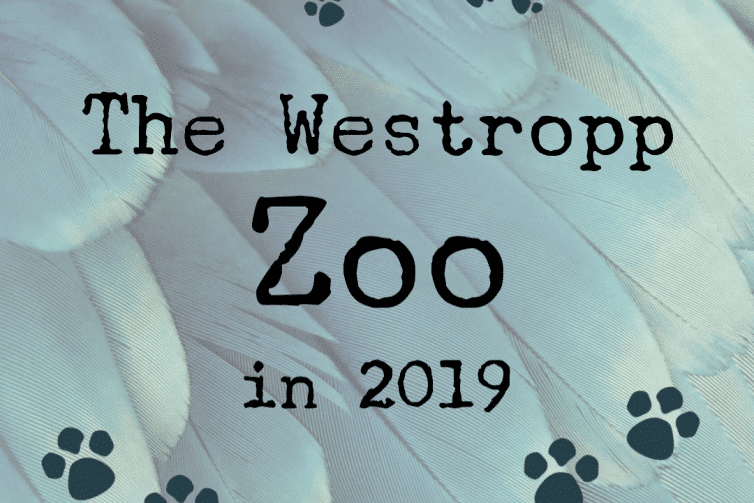 In January we adopted our puppy, Roscoe. He was the absolute worst puppy I have ever had, although Lila was a close second. (Smart dogs, it seems, are more challenging as puppies!) He is now about 14 months old, and finally to the point where I would consider him potty trained. He still chews things he’s not supposed to semi-regularly, but not as often as before, and he is still very bad about stealing food left on the table. But overall, he’s not the worst dog in the world. 😉 On the plus side, he is very smart and sweet and he is the cuddliest dog I’ve ever had. He’s also a good rollerblading companion.

Also in January, we bought two parakeets who we named Oliver and Oakley. They pretty much hate me, and do not like being handled whatsoever. However, their sounds are pleasant to listen to, and I have allowed their flight feathers to grow out so they can fly around the room when I open their cage, which is fun to watch.

In February, we sadly had to say goodbye to our beloved dog, Marley. He was 14 years old (or possibly even older), and beginning to decline with symptoms of congestive heart failure. I knew that I didn’t want him to suffer, so I chose to have him put to sleep gently at home after he began to lose interest in eating. Even though he started eating again on the day he was put to sleep, and he was still in many ways happy and energetic, I knew that it was an upswing that wouldn’t last. His last day with us was a very happy day for him, and he went to heaven without having to suffer through a long decline. It was a hard decision for me, but I have to believe I made the right one. And yes, I do believe he went to heaven! The Bible describes animals in heaven, and I can only hope that we will be reunited with loved ones, including our beloved pets, in paradise. 😊

I adopted Marley when he was about a year old, and I was 13 years old. He had been with me through so much, and he was really the best-behaved dog of our pack by miles. He was also just special in so many ways. He was sweet, quirky, gentle, and goofy. I love and miss him very much, and I know I will never have another dog like him.

In April, one of our mice, Hazel, also passed away. We decided not to get another companion for her sister, Harriet, since mice don’t typically live past one or two years old and they were both already about one and a half at the time. Surprisingly, Harriet is still with us and just passed her second birthday!

After that, we adopted our three guinea pigs, Piper, Annie, and Calla. Piper and Annie were adopted together from a family who no longer wanted them. (Fun fact, they came in a cage so small that we now use it as a litter box). Calla was adopted from a teenager who no longer wanted her, even though she is incredibly friendly and sweet! (Fun fact number two, she previously lived alone in a tiny glass aquarium with no hay… which is not appropriate care for a guinea pig.) Our three pigs are now living in a luxurious 10 square foot enclosure with the unlimited hay they deserve. Not to mention the fresh veggies! It is one of my greatest joys of pet ownership to be able to provide excellent homes for my animals. 😊

Not long after that, we found a bunny just hanging out in a neighbor’s yard, and took her home. She didn’t belong to the home we found her at, and I was hopeful she was abandoned simply for the fact that I very much wanted to keep her. We named her Cinder and she was the most friendly, sweet, and fun bunny I’d ever seen. Sadly, soon a neighbor from down the street came around handing out flyers for their lost bunny, and we very reluctantly returned her. That family was not caring for her properly, so it was particularly saddening.

At that point, we decided we wanted a bunny of our own and we adopted Ellie from a local rescue. She is a big, bold girl who will tolerate being petted more than most bunnies I’ve seen, but she still isn’t exactly what I’d call cuddly. Most bunnies are, by nature, timid creatures and won’t sit and be petted by people for long. We thought we could get a baby bunny, and if he was handled by us from a young age, he would be more cuddly—enter, Chester. Sadly, Chester has grown up to be a more standoffish bunny than Ellie, and he runs away without fail anytime I try to touch him.

We were about to give up on the idea of having a bunny anything like Cinder, but we decided to give it one more try and went to see if any of the bunnies at our local rescue were particularly friendly. Lo and behold, we met little Kit. He is very cuddly and doesn’t just tolerate being petted, but actually solicits attention. As a result of our search for the perfect bunny, we now have three!

Chester and Ellie are very well-bonded, but Kit has not been accepted into the herd. So, in our pet room where all of the small animals live, Kit has his own large enclosure, which takes up a little less than half of the room. The rest of the open space is for Chester and Ellie. All of the bunnies live cage-free, since they are litter-trained. Even though they don’t have total access to each other, Kit is able to easily see, smell, hear, and even lay next to the other buns on the other side of the fence, which I feel helps fulfill his social needs.

We are definitely at capacity with our small animals, and moving forward my plan is to allow all of them to live out their natural lives and not adopt any more. I’d actually love to eventually have one dog, one cat, one horse (boarded), and maybe one small animal (or at most one per child, if they want their own pet). Of course, that is at least a decade away from happening, so for now we are going to have a full house of animals!

In September, we made the tough decision to rehome Lila. For months, her and Macy had been fighting and Lila had been injured. Despite our concerted efforts to work with both dogs on training, and many alternative ideas we considered such as keeping our house divided using baby gates or keeping one dog crated at all times, we eventually came to the decision that all involved would be better off by rehoming Lila. She is better suited to be a single dog, and when it came down to it, the thought of rehoming Macy was unbearable. (Not to mention the increased difficulty of rehoming a bully breed dog with a history of aggression towards other dogs). For the record, Macy gets along just fine with other dogs at the dog park and with Sky and Roscoe. It was really a personal thing between her and Lila.

We did find a great home for Lila and noticed an immediate difference in our pack at home after she was rehomed. We know we made the right decision, and even though we miss Lila, we are happy that she is safe and happy now.

So with that, we are now at three dogs, two cats, three guinea pigs, three bunnies, two birds, and one mouse—a total of fourteen pets!

How do I manage it, you may ask? It’s actually not as hard as it may seem. It takes me under an hour a day to take care of all of the pet care responsibilities! Time spent petting animals and walking the dogs is not included in that, because a) I don’t walk my dogs every day, but when I do walk them I consider it fun, not a chore, and b) petting animals is also fun, not a chore.

Honestly, Cory and I often find ourselves at the end of the workday with all of the chores done and nothing to do! Despite what appears to be a full plate, we have a lot of spare time and we definitely have the capacity add more to our lives. That’s a big reason we know for sure that we are ready to have another baby.

I love having a lot of pets and it gives me something positive to do with my time and energy. I also love that my kids get to experience living with animals and learn how to care for them. I wouldn’t mind downsizing over time, as I mentioned before, and in fact I feel it would be quite nice to have only a few pets for a change. Nevertheless, I like things the way they are now and I’m glad that the Westropp Zoo is so interesting and fun.

In late January, as of the time of this posting, we also have now added two betta fish to our zoo. While I truly didn’t want any more pets, I couldn’t resist a little “homeschool” lesson setting up a habitat for the fish with the kids. The fish are the kids’ first pets that belong to them, but of course as the adult I am the one responsible for taking care of them. The kids help feed them twice a day, which is fun for them, and they love to watch them swim around their aquariums. They even named them—Biscuit is Cody’s fish and Baby is Abigail’s.