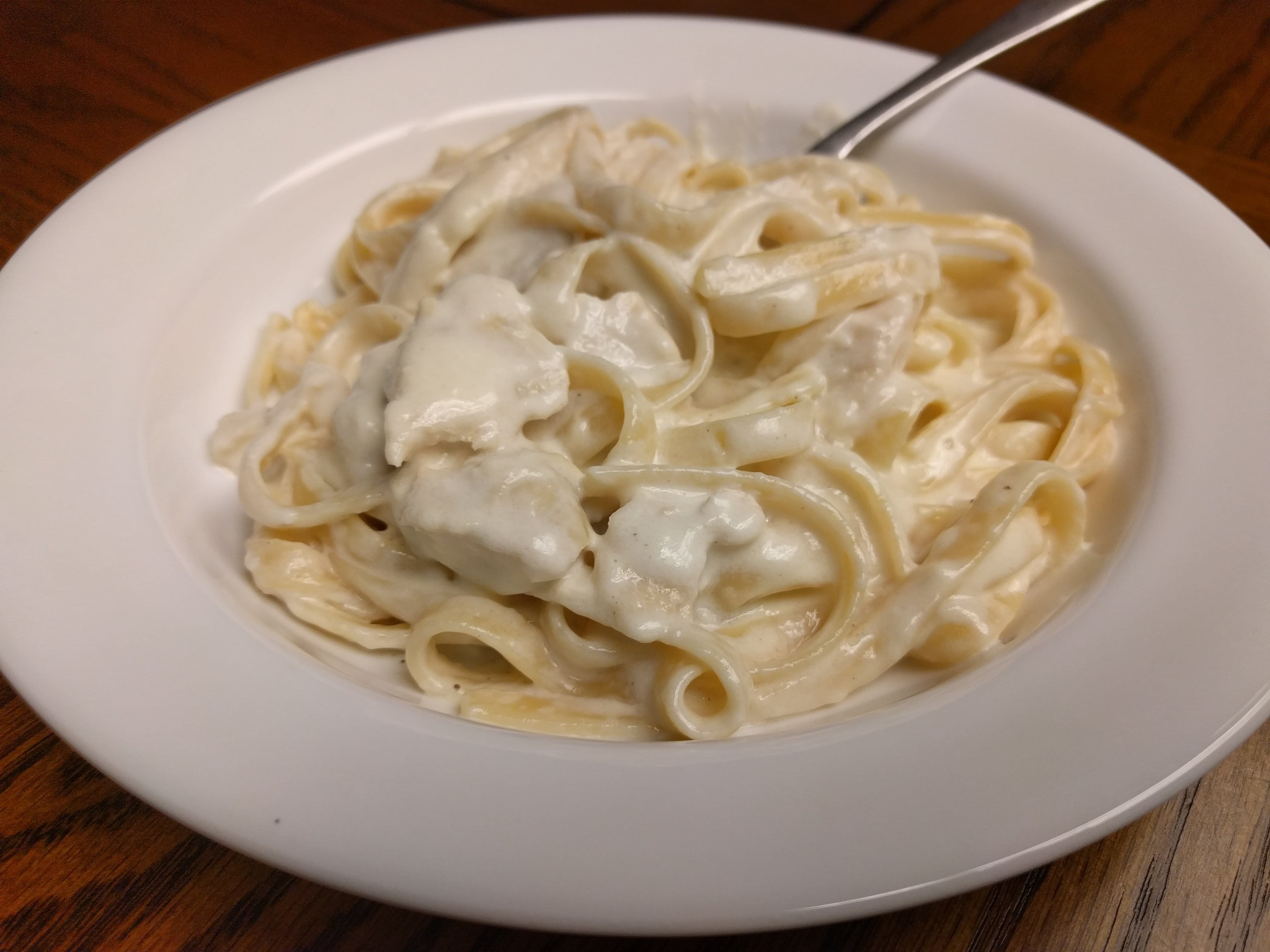 This meal is both easy and decadent. It does take a good amount of time, mostly because I cook my chicken from frozen (in the deep freezer), but it’s a fairly hands-off cooking process. It’s not something we cook more than once per month in my family, but reserve as a special treat because it is very high in fat. That being said, it is of course delicious and my new favorite meal, ever since I learned to make it last month. This month, I perfected the recipe and altered it to use my new favorite appliance, the Instant Pot. Now it’s even easier, and more delicious, and I just had to share it!

Instructions:
Place chicken breasts directly in the inner cooking pot of the instant pot. Add chicken base with 1 cup water, or 1 cup of chicken broth. Add garlic for additional flavor, if desired. Hint: I’ve recently added a garlic press to my kitchen arsenal, and I can’t believe I didn’t buy one sooner. It makes adding garlic to my dishes SO much faster and easier. Close the lid and move the vent to sealing, then cook on manual (high pressure) for 15 minutes, for deeply frozen chicken; 10 minutes for normally frozen chicken; or 8 minutes for fresh chicken. After cooking, allow pressure to release naturally for 15 minutes before opening. Check the temperature of the chicken, ensuring it has reached at least 165 degrees Fahrenheit. If necessary, cook for an additional 5 minutes and do a quick release.

While chicken is cooking, bring a large pot of water to a boil. Add the pasta, and cook according to package directions. Strain, and toss with butter. Hint: Take a small slice of butter from the stick you will be using for the sauce. Also, I recommend leaving the pasta in the strainer, so you can re-use the pot to cook the sauce.

In a large saucepan, melt the butter. Whisk in the cream and season with salt and pepper. Bring the sauce to a simmer, then cook for 2 minutes. Lower the heat, and whisk in the cheese. Don’t worry if sauce seems thin while it’s cooking. It will thicken by the end!

After the chicken has cooked, cut it into bite-sized pieces. Add the chicken and cooked pasta to the sauce, and mix well before serving. Hint: a pasta ladle is extremely useful for this. Serve with steamed green beans or a fresh salad to complete the meal, and enjoy!

Abigail is now five months old! She weighs 16.8 lbs and is almost 26” long. She is in the 78th percentile for weight, and 72nd for height. She wears 6-9 month size clothes, but some of her footsie pajamas are 12 month size. Her eyes are still the same shade of blue, and it seems likely they will remain blue at this point. Her hair seems to be more and more sparse, since she hasn’t grown any more that I can tell since being born.

She wakes up on average three times per night to nurse. She tends to be a somewhat restless sleeper, but I think that is because of her recent flare-up of eczema, which is making her itchy. The eczema appeared suddenly almost two weeks ago, starting on her cheeks and then spreading to the rest of her body. We started giving her daily baths and lotioning her afterward, which is apparently the most important thing to do for treating eczema. We also moisturize the most affected areas of her body a few times during the day. After about a week, it has mostly cleared up, but not completely. I’m not too concerned about it, but it is an annoyance.

We also have been fighting a diaper rash with her for over a month now. We’ve tried everything including coconut oil, traditional zinc oxide diaper rash creams, petrolatum ointment, anti-fungals, cortizone, and airing it out. She also wears “natural” diapers (without chemicals, dyes, or fragrances) and we use “natural” wipes (which contain mostly water and gentle, plant-based cleaners). The most successful treatment has been the petrolatum (Aquaphor) and a special healing ointment we bought called “Bee Magic” which contains honey, bee pollen, and other bee-related substances. Using those with every diaper change, she has almost completely healed several times, but then the rash will flare up again for no apparent reason. As of right now, it is “manageable,” meaning not getting any worse, and not severe enough to be very concerning. Like her eczema, it is more of an annoyance than anything. Diaper changes are a hassle because she tries to scratch herself, so we have to put mittens on her hands and try to pin down all of her limbs while smearing two types of ointment on her. As you can imagine, it’s basically an olympic sport. Rinse and repeat every two hours!

Anyway. She loves to sleep on her side now, and usually sucks on her thumb while sleeping. She tends to have a mid-morning nap and an early afternoon nap, each lasting one to three hours. I can usually tell when she’s tired because she will start to act grumpy. She’s so easy to put down; I close the curtains, put the white noise on, and then rock her. It takes just a few minutes for her to fall asleep. She doesn’t wake up when I put her down in bed, either. Easy peasy!

She doesn’t like her swing, so we haven’t used it in weeks. She prefers her bouncy seat, floor seat, play mat, high chair, or playpen. Of course her favorite option is being held, and she also loves to be worn in the carrier. This week, I was able to take her on a walk in the stroller, and she sat happily in the upper seat (it’s a double stroller). She also went in the baby swing at the park and loved it.

She loves grabbing things, including skin, hair, and faces. But toys will also suffice. She likes sucking on tags, soft toys, and teething toys. She will almost always roll to her belly when she’s laid down to play, and she can now push up high on her arms (push-up style). She also is starting to push her bottom up by bringing her knees under her. It’s a small step towards crawling, which is exciting. Abigail cannot sit up on her own yet, but she’s getting close. She can roll easily from back to belly and vice versa. She actually can move pretty far just by rolling and wiggling.

Generally, she’s very smiley, giggly, and a content observer. She laughs at people when they burp or blow raspberries, and she still finds peek-a-boo hilarious. Cody likes to snuggle her and try to make her laugh.

This month we will offer her some solid food for the first time. She seems interested in our food when we eat, so we’ll see what happens. We’re going to start off with some simple pureed baby food and baby cereals mixed with breastmilk. I’m excited to see how she does.

My sweet baby girl is growing so fast. I love this stage!