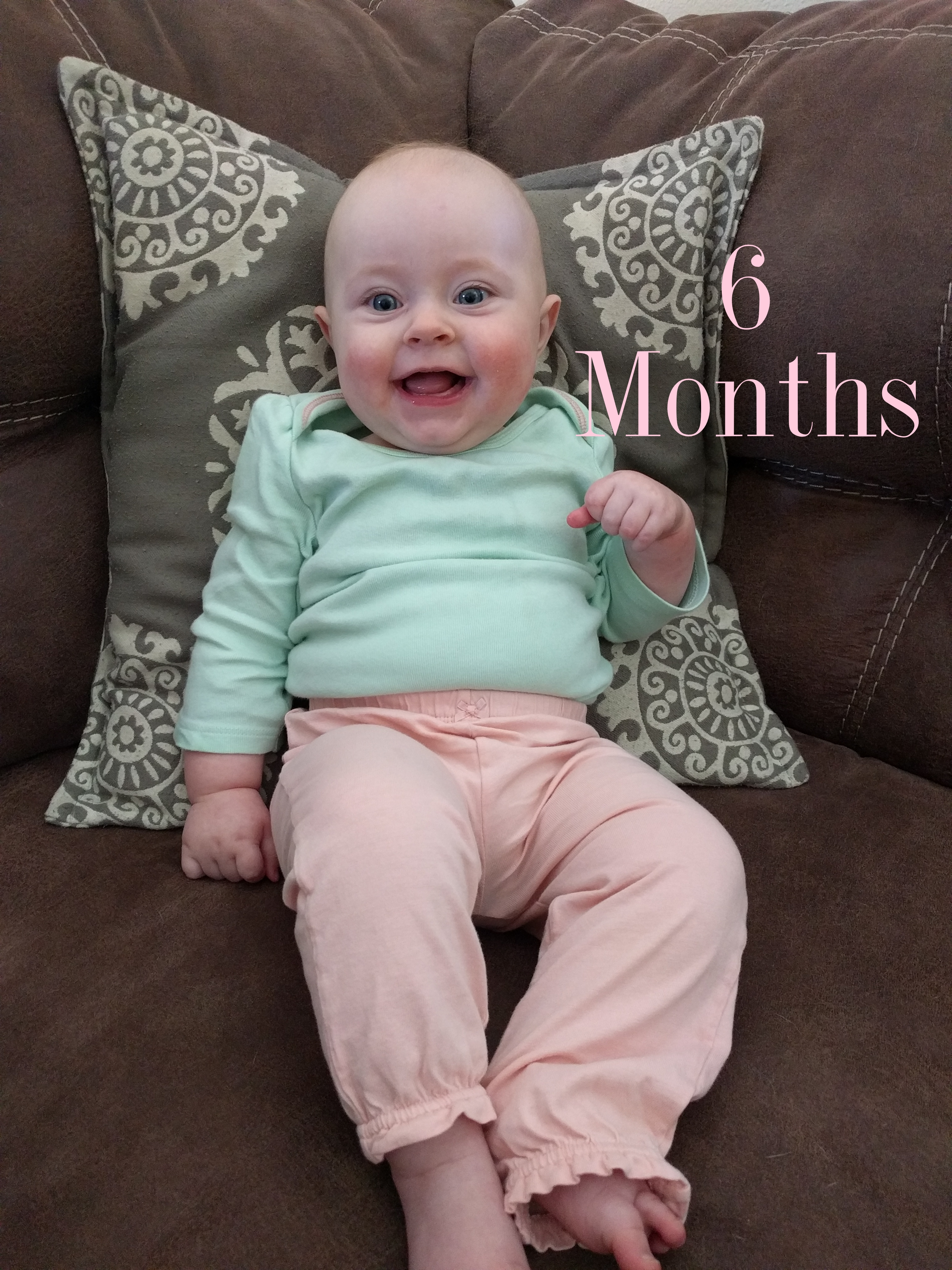 {This is very belated, as I wrote it but didn’t get around to posting it until now!}

Abi is still wearing some size 9 months clothes, and she also wears some things that are size 12 months. She weighs 18 lbs, and is tall for her age (or I guess you would say “long” at this stage since she’s not standing.)

She doesn’t sit up on her own yet or crawl. She still mostly likes to get around by rolling, or by us carrying her. She does travel pretty far by rolling and wiggling, so maybe she doesn’t feel too motivated to try anything more just yet. She doesn’t like to lay on her back, and always rolls to her side or belly when we put her down. Diaper changes are a struggle because she fights to be on her belly!

The biggest change this month has been her desire to explore things with her hands. She is no longer content to just watch the action, she wants to grab it for herself! She loves to grab, shake, taste, and slam anything she can get her hands on. Anything we are doing while holding her will be targeted. Because of that, we can’t really do much else while holding her any more. No computer, paper books, or cooking. She also tends to wriggle around a lot while she’s being held, which makes it more of a two-arm job. And unfortunately, our easy baby has disappeared, as she now demands to be held for a majority of the day. I still wouldn’t consider her high-need, because in other ways she really isn’t, but I also wouldn’t call her “easy” any more.

Because of how heavy she is, I’ve found wearing her to be a bit uncomfortable and hard on my back. So I don’t typically spend a lot of time with her in the carrier, but it’s definitely still useful for outings, and Cory still wears her for hours each day. Personally, I prefer to hold her in my arms, which I find to be easier on my back. She also seems more content that way, because I can shift her position and try different things to keep her entertained.

She did her first reach to be held this month, something I always find cute. She reaches for both me and her dad, though she does have a preference for me sometimes. She’s had a couple of episodes of separation anxiety from me, but she’s also accepted other caregivers easily. We even went out on a date, and left her with a babysitter!

Abigail has always seemed to eyeball our food, so when our pediatrician said we could start trying to feed her baby food, I thought, “why not?” And as it turns out, she is a great eater! It’s such a new experience for me to spoon feed a baby food and have her actually swallow it and open her mouth for more. So far, we’ve tried sweet potatoes, pears, peas, bananas, carrots, and cereal. She’s liked all of them except for the pears and cereal, and she wasn’t as enthusiastic about the peas as she was with the others. But she really seems to love sweet potatoes, bananas, and carrots. It’s exciting to see her accepting fruits and veggies already, and it gives me hope that she will be a good eater as she grows up.

Of course for now, she’s still so young that I’m not looking to make solid foods a big part of her diet. I still believe breastmilk is best for the first year. I typically feed her just half of a jar of stage one baby food (which is a tiny jar to begin with), then finish it off the next day and wait a few days before feeding her another one. I like the idea of introducing a variety of foods to her, but as I said, nothing beats breastmilk for baby nutrition!

Speaking of which, she’s still a great nurser and my supply is great as usual. She nurses about every 3 hours or so, and typically two to three times during the night. She sleeps with us in our family bed, and we all go to bed at about 10 PM (although Abigail frequently falls asleep before that). Cory gets up with the kids, usually sometime between 6:30 and 7:30. Occasionally, Abigail and/or Cody will stay asleep with me until I get up at 8. That means generally, Abi sleeps for nine to eleven hours per night.

She takes two naps at fairly predictable times now. Her first nap is in the late morning, around 10:30 or so, and her second nap is usually in the mid afternoon, around 3:30 or so. It can vary by a couple of hours some days, but that’s the most common. Her naps are about an hour long on average, but they can also be longer. When teething is bothering her, she has trouble staying asleep for naps and is restless at night.

As for her eczema and diaper rash: we finally beat it! The eczema could flare up again without warning at any time, of course, but for now her skin is clear. We bathe her in just water (no soap) every other day, and follow that with a full-body lotioning. The diaper rash was finally cured when we got a prescription for a steroid cream. It took about two weeks for it to fully go away using that, but it’s finally gone. Unfortunately, ever since we stopped the steroid cream, the rash keeps trying to come back. We put a light layer of Aquaphor on her at every change, but we still notice redness appearing every few days. When we see it, we put on more steroid cream for a day or two, and that takes care of it. It’s frustrating to have to keep using that, though, because I know it’s not recommended to use it long-term. Her skin is just so darn sensitive, and doesn’t respond to anything else! But at least for now, it seems to be under control, and she’s not uncomfortable any more. Thank God!

So that’s about it! Abi is a happy, healthy baby, and just the sweetest little nugget. Those chunky cheeks and big blue eyes, and her adorable smile… they get me every time. <3