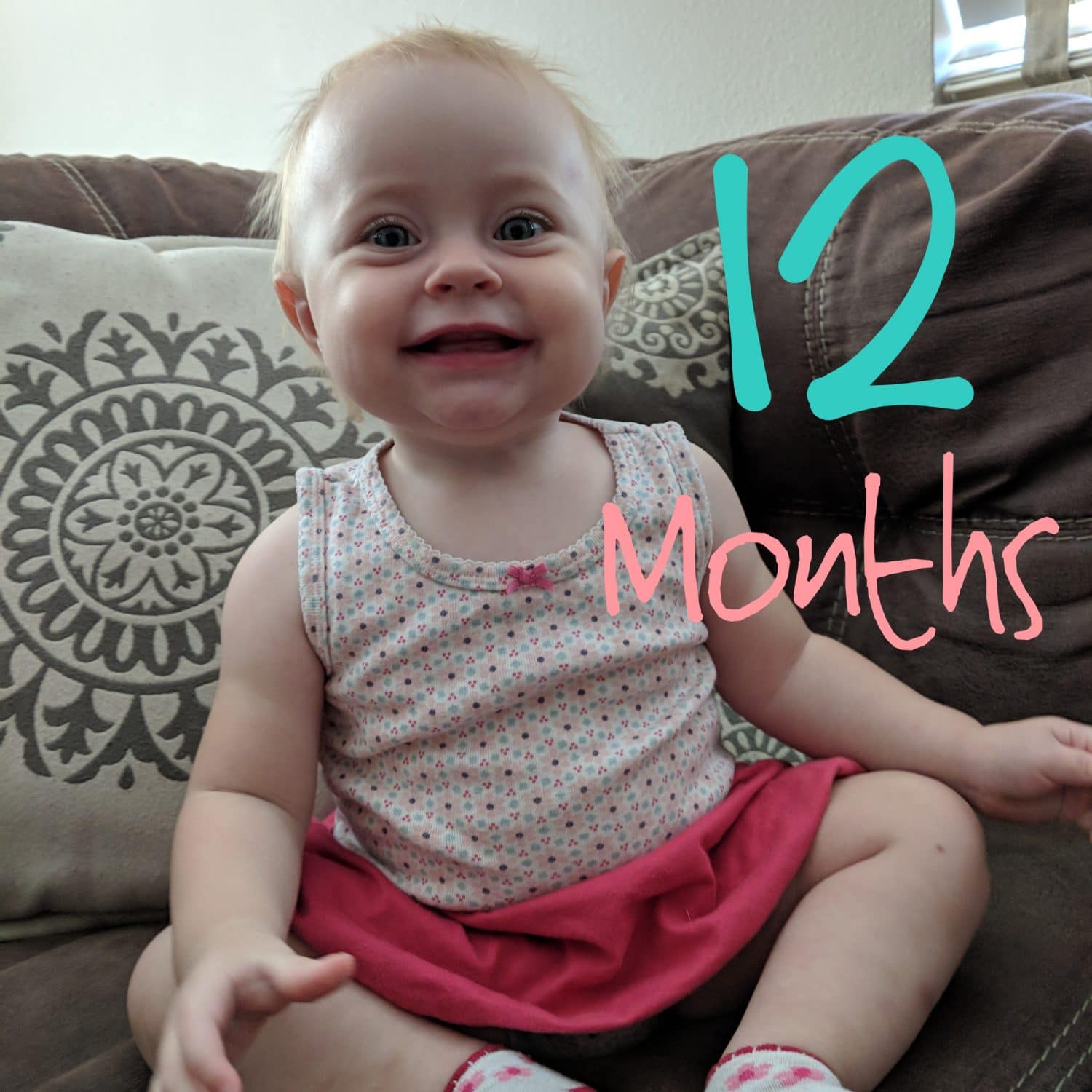 My little baby is now a one year old! The time has flown by even faster the second time around.

Abigail is a very sweet, curious, active, and silly girl. Here are some of her traits and quirks at the age of one:

She likes to put on things like socks and hats and shoes. If she sees shoes on the floor, she will try to put them on her feet, or if they’re adult-sized, she’ll settle for wearing them on her hands and sliding around the floor on hands and knees. When she sees her own shoes, she insists on wearing them. Socks are also a frequent target.

She still puts a lot of things in her mouth. She especially likes to find tiny pieces of whatever on the floor to put in her mouth. Although I vacuum often, it’s impossible to keep up! I have to watch her closely to keep her from eating things she shouldn’t. She also likes to put things in her mouth that stretch the limits of what her mouth should be able to hold, like a ping-pong ball. (Little weirdo.)

She is becoming more vocal, and makes all sorts of silly sounds. Her and Cody spur each other on in making loud and silly noises, then cracking each other up laughing. She doesn’t say any words regularly, even though she has said “mama” and “dada” a few times.

She hit two milestones before her first birthday: her first teeth finally emerging, and her first independent steps. She now has two front bottom teeth just peeking out, and it looks like her two front top teeth will be next. As for walking, she doesn’t use it as a primary way of getting around yet, but she thinks it’s super fun to stand up, take a few steps, and bask in our adoration.

She loves dancing to music she likes, usually something with a beat. Her trademark move is to twist side to side with her arms out and elbows crooked. More recently, she’s been experimenting with some foot-stomping. 🙂

Abigail is still quite clingy, but she is more willing to go to other people to be held than Cody was at this age. She accepts brief separations from us with little fussing. Cory and I can attend church services together, go on date nights, and let family members help us with the kids when we get together! It’s a treat.

Around the house on a daily basis, it’s unpredictable whether Abigail will want me to hold her all day or perhaps play independently for some of the time, allowing me to get stuff done. The first kind of day is hard, because I’m very task-oriented and being handicapped by a baby demanding to be held constantly is frustrating. The second kind of day is less common, and very appreciated. It will be nice as she gets older to see her become more and more independent, and get a little bit more of my own time back.

Part of Abigail’s clinginess is her habit of grabbing the shirt of whoever is holding her. She almost always has one hand fastened tightly to the neckline of my shirt. It’s becoming more common for her to take it a step further and shove her hand right down my shirt. This can be annoying when we’re in public and she nearly exposes me to the world. I also have to put my foot down when she starts getting a little too “touchy feely.” (Here’s one of the weird things I’ve had to say all too often as a parent: “Stop touching my nipple!”)

Unfortunately, Abigail’s naps are not very good. She takes only one nap most days. ONE. At this age, Cody was just transitioning from three to two naps. Abigail is already down to one, and I fear for what lies ahead. Her one nap isn’t anywhere near the luxurious three hour naps Cody used to take up to the age of three. Nope, she’ll give me an hour on a good day. (Maybe up to two hours on a marvelous day, but sometimes only 40 minutes on a not-so-great day).

Even that one nap is often a struggle. She usually falls asleep nursing or in the carrier, and I attempt to move her to her bed. We recently bought a crib for her (the first crib we’ve ever used, since Cody never had one). We put her down there for her naps, and we reserve the right to plop her in there at bedtime if she decides to pull another midnight wake-up party.

On a happier note, she is an excellent eater. She eats many foods, and is not picky. Almost anything we set in front of her, she will eat enthusiastically. Of course we have to serve her foods that are soft enough for her, and cut into small enough pieces, since she only has two tiny front teeth. But that doesn’t stop her from being a little foodie! It’s so lovely to see our child happily eating fruits and vegetables. Cody didn’t eat ANY solid food until he was two years old, and even now at almost-four, he doesn’t eat fruits or vegetables except on a rare occasion. So suffice it to say, it’s wonderful to see Abigail enjoying food so much at this age.

That’s pretty much it! Abigail is a joy, and seems to only get cuter by the day.

Happy First Birthday, my sweet girl! Mommy and Daddy and brother love you sooo much! You are my treasure. Here's Amelia at 20 weeks, from our last {planned}

Our little Sky Pie is at the rainbow bridge with M

Ah, pregnancy. Here's a new post on my blog, link

God is good! Whether our pre-covid moving plans we

Homemade cottage cheese! Who knew you could make i

When you order electrolyte drink mix and instead A

Welcome to my quarantine nightmare. Bees are invad

Two of the only things I've actually enjoyed eatin

My family will be joining in worship and prayer fr

@hal3yhuff You asked for it! Here's the first pict

Today I'm 13 weeks preggo and tomorrow we find out

Abi and her babies 💕 not to mention her obsessi

Kit and Karma together at last 💕 They make a cu

Checking out my new home 🏠 @luckybunnyrabbitres

In my bunny igloo 🐰

Snuggles with the human 💖

I met my new friend Ellie today! My human says she