I love the fruit of the spirit. In the Bible, we are given a list of characteristics that the Holy Spirit is supposed to produce in us. These characteristics are the Fruit of the Spirit. They are love, joy, peace, patience, kindness, goodness, gentleness, faithfulness, and self-control.

I love this part of the Bible because it gives me a clear goal for what I should be working towards as a follower of Christ. I should be living in such a way, and inviting the Holy Spirit into my life on a daily basis, so that these traits are visible in my life.

But sometimes, I think it’s easy to see a list like this and think that it seems too unattainable. I’ll never be a person who embodies all of these traits all of the time. It can be somewhat discouraging.

One thing I like to do to combat that is to look at the opposites of these words. When I frame it in this way, as a list of things I should avoid being and doing, it can actually make it easier to pursue these traits in my life. For example, instead of thinking “I need to love everyone,” I can think “I need to turn away from hate.” It feels so much more attainable when I think of it in that way.

Love.
Fight against hate and apathy.

Joy.
Say no to despair and discontent.

Kindness.
Refuse to be rude or inconsiderate.

Goodness.
Be an enemy of evil behavior and cruelty.

Faithfulness.
Despise disloyalty. Don’t give up.

Self-Control.
Choose not to be impulsive. Do battle against addiction, rage, and laziness.

While opposites don’t convey the complete mission we are given with these Fruits of the Spirit, they are a solid place to start. These are the things I am working toward today, with God’s spirit working in me.

Lately, I’ve been discovering that I have the freedom to change my mind. Maybe this sounds weird to you. Of course I can change my mind, why wouldn’t I be able to?

Well, for me, I guess I have always felt that changing my mind was almost a form of lying. I’ve felt that when I make a decision, I should stick to it. I don’t want to be known as a person who just says things, and then doesn’t follow through. That’s a pet peeve of mine, in fact.

But lately, I’ve realized that sometimes, changing my mind is okay. It doesn’t mean I’m an unreliable person, it means I’m a changing person. I evolve, and grow, my situation changes, and so on. I am now embracing my freedom to change my mind!

I’ve changed my mind about two things, recently. One is kind of small, and the other is pretty big.

The small one was adopting a kitten. I have said many times that I didn’t want more than one cat. I have also said that I don’t need any more pets right now. And, I have said that I don’t ever want to adopt a kitten, because grown cats are better for several reasons. Well, I changed my mind. And it was a great decision!

I love my new kitten, Leo. He’s very outgoing, friendly, and affectionate. Every time I get a new pet, I feel that our family is more complete. Many people may not understand why I would want four dogs and two cats, especially when I already have two young children to look after. But I love pets! I find joy in taking care of them and providing them a good home. I love knowing that my children will grow up being comfortable around animals, including dogs of all sizes.

For now, we have to stop adding to our pets, simply because we cannot legally own any more dogs. The limit is four in our city. As for cats, we don’t have room in this house for a third litter box, so two is our maximum. And I am not comfortable housing small animals without providing them their own secure room, after what happened to the guinea pigs. So as long as we live where we do, we are at capacity.

But I am not going to say that there won’t be any more additions once we eventually move to a bigger home. We have a dream of moving to a ranch house and owning some livestock, and adding several more small animals to our family. Until then, I’m quite content with things as they are.

The bigger decision I recently changed my mind about is having more children. I said that after Abigail, I was done with pregnancy. But I still want at least one more baby, and something doesn’t feel right to me about adopting a newborn when I know that I am able to have children biologically. I don’t believe there is anything wrong with it, but I just don’t feel like it’s what we’re supposed to do. I still want to adopt older children later on, but right now, I’m not done with raising babies.

And truthfully, even though pregnancy is really hard for me, and birth is also challenging, it’s also the most rewarding thing I’ve ever done. I’m not ready to be done with it. I want to do it again!

The one thing I want to do different for baby #3 is to wait until Abigail is done nursing before getting pregnant. I had to wean Cody before I was really ready (even though he was over two years old), because it was too painful to nurse when I became pregnant with Abigail. I convinced myself that I would nurse him again when the baby was born, but by that time, it didn’t feel right to go back and of course I never did nurse him again.

Also, being pregnant when he was that age, just barely done being a baby, was hard. I was detached from him because of my discomfort, and I feel like I missed that stage of his life. I feel like weaning and then my pregnancy really changed our relationship in a way I wasn’t ready for.

So, I want to avoid that this time around. As such, we are planning to wait until Abigail is about three years old to start trying to conceive. If she hasn’t weaned herself by then, I am comfortable weaning her when I get pregnant. Cody will also be six years old by the time I’m pregnant with baby #3, and that will make things a lot easier.

Right now, Cory is on board with having another baby, but he isn’t convinced about having a fourth. I will be 29 during my next pregnancy if all goes according to plan. I’d want a similar age gap between #3 and #4, and I don’t really care to have another baby past age 35, so that gives us a lot of time to decide what we want to do. Personally, I am hoping for four babies, but who knows what will happen. Only God, of course. 🙂

The future looks bright! I feel energized by looking ahead, planning, and dreaming. I’m discovering that giving myself the freedom to change my mind makes it even more fun. I am still on the adventure of life, discovering what God has for me. 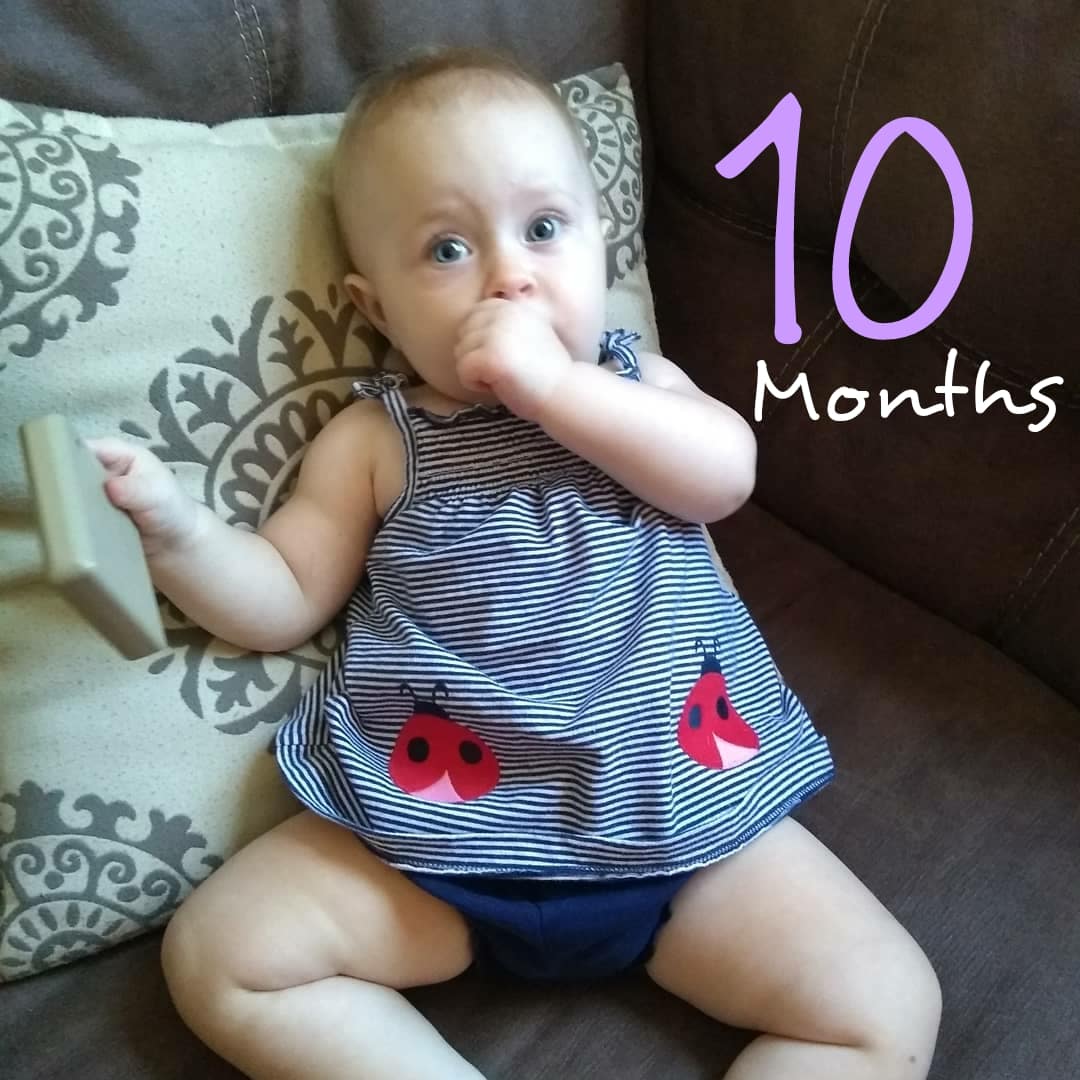 Little Abi is now 10 months old. It’s a fun age, but also a challenging one!

She takes two naps per day, about an hour give or take. Really, that’s not much for her age, but I’ll take what I can get.

She sleeps okay at night, sometimes only waking up a couple of times to nurse, but more often she wakes up frequently and is restless. I blame it on teething, because ibuprofen seems to help. Speaking of teething, she still doesn’t have a single tooth. They’re in hiding!

Abigail loves to explore. She crawls everywhere (always on her hands and knees now instead of her belly), climbs on things, pulls herself up to stand, and puts everything in her mouth. She can climb up the small slide we have in our play area by herself, on either end (ladder or slide). She climbs up the stairs any chance she gets. She keeps us on on our toes!

She is eating baby food, but only to supplement her primarily breastfed diet.

Her diaper rash has finally healed, and only has mild flare-ups now. The ointment that finally worked for us is called Triple Paste, and I am so thankful for it.

Abi gives “kisses” sometimes, involving putting her open mouth on my face (or Cory’s). It’s pretty cute, actually. Probably the cutest thing she does on a regular basis is playing peek-a-boo. She loves it when we play with her, but even when we’re doing other things, she’s constantly seeking out fabrics to use to cover her head and then pull them off, with a look of pure delight on her face. She will use clean laundry from the basket, the play scarves we have, or even the skirt of her dress. It’s super silly!

She is extremely clingy. She wants to be held pretty much all the time, but sometimes her desire to explore triumphs and we will get a few minutes of a break from holding her. A few times a day, I have to put her in her playpen and let her cry so I can take care of some basic needs for myself, Cody, or our many pets. It can be pretty stressful.

We wear her in the carrier often, too, but she tends to not like it when I wear her facing in unless she wants to sleep. It’s difficult to wear her facing out and get anything done, because she’s very grabby. So the carrier doesn’t help me much in that way, but it is often how we put her to sleep for naps or bedtime.

Abigail loves her brother, and they often make each other laugh just by looking at each other and being silly. She also enjoys patting the dogs when they’re not too rambunctious and overwhelming her. She especially loves following our new kitten, Leo, around the house as he explores. She tries to pet him, and our other cat Luna, but they usually move too fast for her to get a lot of pets in.

When daddy comes home from work, Abigail gets very excited and crawls to him so he will pick her up. But in general, she tends to want me to hold her. So when Cory is home, I often have to stay out of her sight in order to get things done, because as soon as she sees me she will start fussing and trying to get me to hold her.