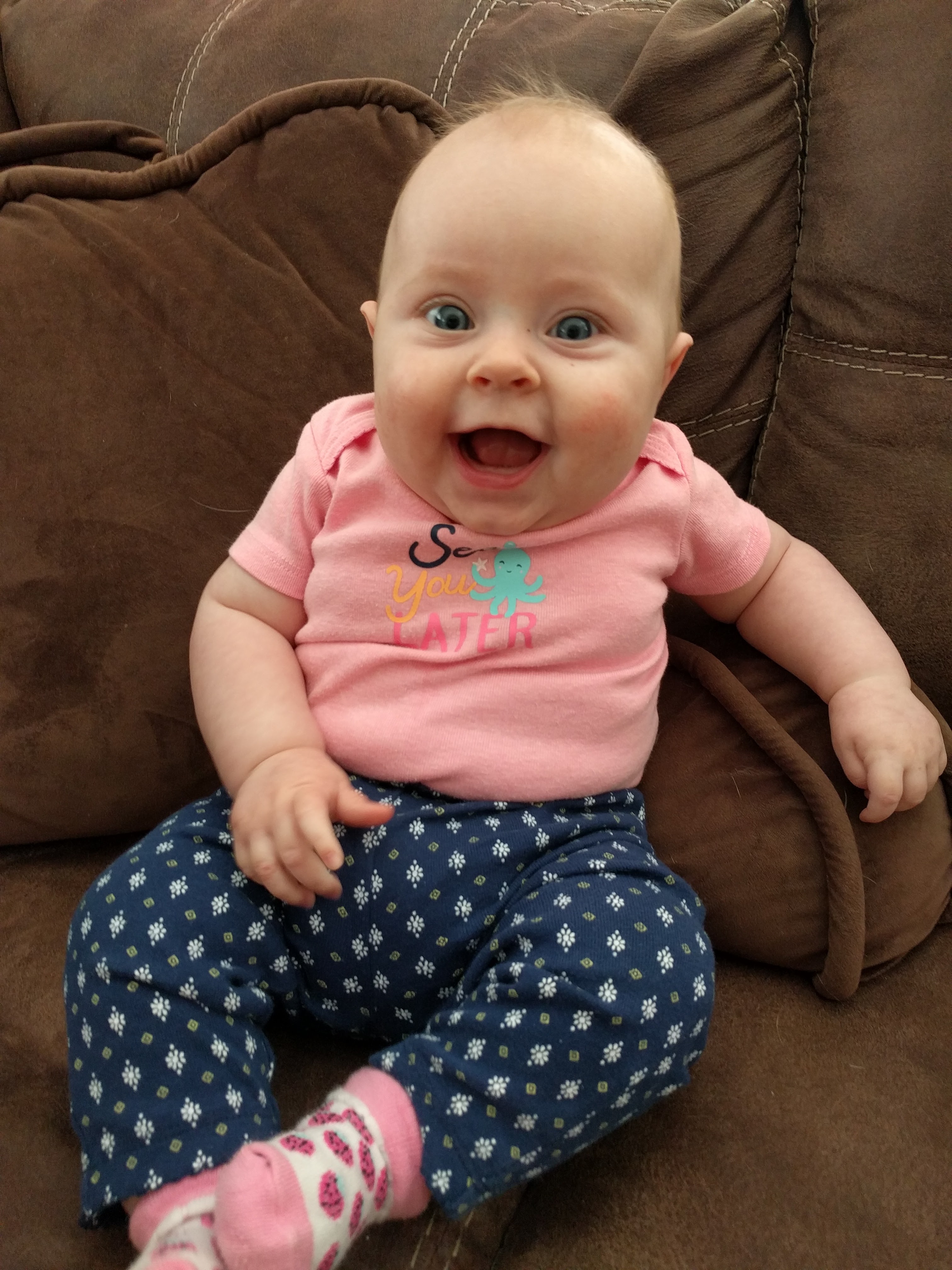 On Monday, Abigail turned three months old. Here’s what’s new with her in the past month:

Abigail now weighs 15 lbs. She is still wearing 3-6 month size clothing. She nurses more frequently now, I suspect due to teething pain. For several weeks, she was sleeping through the night, but recently has been waking up two times per night to nurse. I discovered that she sleeps better when she has her own bed, so I moved myself out of the twin bed we were sharing, and I’ve been sleeping with Cory and Cody in our king bed instead (the beds are pushed up next to each other, so she’s still close by).

She doesn’t have a nap schedule yet, but she takes one to three long naps during the day. On bad teething days, her naps are short and she mostly wants to sleep while nursing. In general, she has a lot of awake time now, and spends it contently laying in her playpen, sitting in her high chair or floor seat, laying on her playmat or on the couch next to us, or of course being held. She prefers to be held facing out, just like Cody did, and we wear her facing out in the ergobaby carrier frequently.

We haven’t tried giving her a bottle since she was a newborn, but she never really took to it then. The same goes for pacifiers. She loves to suck on her thumb, or sometimes her other fingers or her whole hand.

She cries more often now, but usually only when she wants to be held or nursed. Rarely, we are unable to calm her for a few minutes, but generally she’s easy to calm. When teething isn’t bothering her, she’s a very content and happy girl. She smiles often and giggles at us, Cody, and the dogs. She loves peek-a-boo, and when Cody “plays” with her. Speaking of which, Cody is so great with her! He’s very sweet and loves to give her attention. Abigail is very vocal and makes a lot of cooing noises when she’s happy. Oh, and she loves music!

Abigail can hold her head up very high and seemingly indefinitely while on her tummy. She props herself up on her elbows a bit, too. She is able to roll from her back to her tummy now, but hasn’t quite figured out how to get her arm out from under her. She is able to wiggle around enough to rotate 180 degrees or more while on her back.

I would consider her to be an easy baby still, though teething has made her more “normal” in terms of being more demanding. Because we decided to get a puppy last week, this is fairly bad timing, and day-to-day life is less peaceful than it was. Still, puppyhood doesn’t last forever and neither does teething! And most days, there are still several of peaceful times when baby and puppy are both sleeping (like right now, allowing me to write this post!)