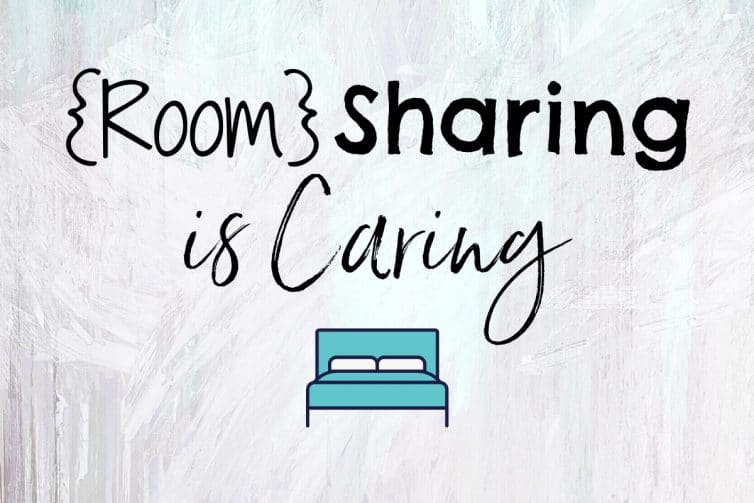 Almost a year ago, we decided to move Cody and Abigail out of our bedroom and into their own. Before that, Cody had been sleeping in a twin bed which was pushed up against our king, and Abigail slept in bed with us (she was still nursing at the time). We decided we were ready to have our own space back in our bedroom, and we converted our master closet to an office for Cory so that the second bedroom could be used for the kids.

Later, when they inevitably woke up in the middle of the night, Cody was allowed to come sleep in a cot by our bed, while I often ended up going back to Abigail’s bed to nurse her back to sleep. It wasn’t uncommon for me to stay there most of the night. After I weaned her in preparation for becoming pregnant again, she woke up slightly less often, but I still spent many nights in her bed because she wanted the closeness.

More recently, we started the process of weaning Cody off of being cuddled to sleep. We knew that with Amelia on the way, it was time for him to graduate to going to sleep on his own. We took several weeks to gradually shorten the time Cory spent laying in his bed, and at the same time we started weaning Abigail off of needing me to lay with her all night. Instead, Cory would move from Cody’s bed to hers after the prescribed time, and I would be able to leave the room.

Transitioning Abigail to sleeping in her cot in our room instead of our bed was the next step, and necessary before we were going to have a new baby in our bed. Unfortunately, our attempts didn’t go well! She got out of her cot over and over to ask why she couldn’t get in our bed. I wasn’t getting sleep, and neither was she. Even Cody was still complaining often about being lonely and scared at night before he came to our room. And with the door opening and closing multiple times every night, sometimes paired with a mischievous cat sneaking into the room or repeated reminders needed for the sleepy kids to close the door, I can say it was not very restful!

Not only am I already getting up multiple times each night to go to the bathroom, and often struggling with pregnancy insomnia, but I was being woken up several more times by the kids’ antics. I knew that once Amelia is here, our system would be very disruptive for her sleep as well.

So, we decided to make a big change. In our new house, we have a rather large master bedroom, with a nook off on one side that just so happens to be the perfect size for a twin bed. And so, after almost a year of trying to convince the kids to sleep in their own room with little success, we decided to officially room-share as a way to finally wean Abigail from co-sleeping and bring peace to our nighttime sleep arrangements. Cody’s loft bed fits perfectly over Abigail’s twin, off to the side in our room, and our room still feels like ours. The kids’ room is still where they keep their clothes and toys, and one of the places they play during the day. Our room is only where they sleep.

Since making the change, Cody has been much more confident about bedtime and the idea of sleeping by himself. Cory still lays with Abigail until she falls asleep, which is often only a few minutes. The best part is, both kids now stay in their own beds all night long! Abigail does occasionally get up and need a reminder to get back in bed, but she doesn’t fight it. I’m confident it will stop as she gets more adjusted to the new arrangement.

This change has allowed us to be ready to welcome Amelia, without having to force Cody and Abi into nighttime independence before they feel ready. Some parents prefer to use sleep training techniques to teach their children to sleep on their own—and I’m not judging those parents by any means! In fact, sometimes I envy them. But Cory and I have always tried to support our particular kids’ high emotional needs, even when it’s not convenient for us. I just don’t have it in me to shut them out of our room at night when I know that they’re scared and lonely and craving the comfort of their parents. For us, extended nighttime parenting has been a way of life that we’ve embraced. That’s just our choice as parents and our way of doing what we hope is best for them.

Deciding to move back to room-sharing after having the kids in their own bedroom for almost a year was a hard decision for us at first. We worried that we were taking a step back instead of making progress, and that other people wouldn’t understand our decision. But really, who cares what other people think, especially about our family’s choice of sleeping arrangements? We know that this makes the most sense for us, and is a step in the right direction because everyone in our home is able to sleep better this way.

One concern a lot of people seem to have about co-sleeping is the effect it can have on marital intimacy. I have to say that in my experience, intimacy has been less affected when we room-shared than when we didn’t, because our kids tend to fall asleep faster and easier, and stay asleep better, when they feel safe and secure in our room. It then becomes a simple matter of “sneaking” out of the room for some private time, and then sneaking back in later with no children the wiser. (When our babies are little, we’ve had a baby monitor on them to ensure that they are safe while unattended in the adult bed, which also has side rails to keep them from falling off.)

When Cody and Abigail were sleeping in their own room, they were more likely to take longer to fall asleep or wake up sooner after falling asleep than we needed them to, and there would often be no opportunity for alone time. Even when the timing all worked out, it wasn’t any harder or easier to prioritize intimacy simply because the kids weren’t in our bedroom. As long as a secondary private and comfortable space in our home has been available, such as a guest bedroom, there hasn’t been a problem. For us, co-sleeping is not a barrier to having a healthy sex life, and if anything it has helped make us more intentional about it.

In a few years, we will have to revisit moving the kids to their own bedrooms to sleep. We’d like to become foster parents when Amelia is weaned and ready to stop co-sleeping, and in order to do that we will need to move the kids out of our bedroom—because foster parents are not allowed to practice co-sleeping or room-sharing, even with their biological children. But until then, we will enjoy the solution that we have found to work well for us.

Truth be told, we love having our kids close by at night, knowing they are safe and sound and sleeping happily. With Amelia, as with Cody and Abigail when they were babies, we are planning to have her in our bed with us to facilitate easier nighttime nursing and care.

On a side note, the idea that I could possibly roll over onto my baby is ridiculous to me, because I have always been extremely aware of where my baby is at night. Maybe it’s a factor of breastfeeding, but if I can wake up instantly at the slightest wiggle hinting that my baby might want to nurse, then I’m quite sure I would never be able to squish her accidentally. Parents who take sleep medications, are obese, drink, or use drugs should not co-sleep—this is true. Having a safe sleep surface is also important. But breastfeeding moms who co-sleep following the proper guidelines are safe candidates for co-sleeping, and I stand by that! Getting enough sleep with a baby who breastfeeds through the night would be impossible for me without bed-sharing, and I know that a well-rested mom is also best for baby’s safety and well-being.

Sleeping snuggled up with my babies, and waking up next to their sweet little faces, has been one of the most special parts of early parenting for me. I will continue to treasure it for as long as I can with my final biological baby.